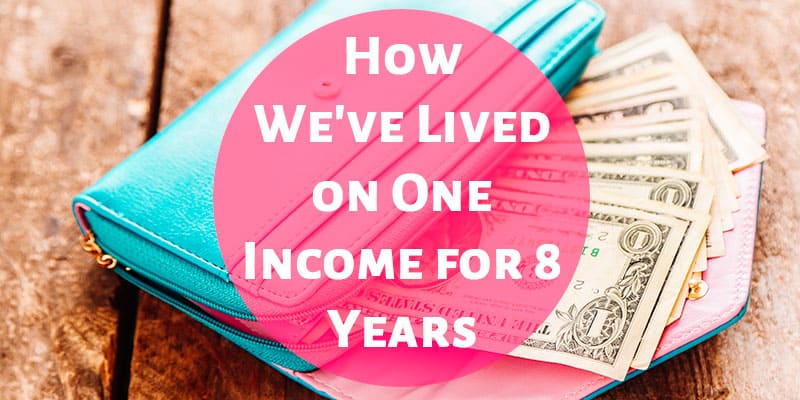 For most of the eight years Austin and I have been married, we have had to live on one income. Even now, with Austin working full time and my blog giving me a full time income (most months), we actually only use one income to budget off of month to month.

It certainly hasn’t always been easy. The biggest reason that we’ve been able to live on one income is simply because we’ve planned our lives that way.

Being able to live off of one income didn’t just happen. It’s been possible because of a whole bunch of choices we’ve made along the way.

You can do this too! Given the crazy-high cost of living in certain cities, it might not be feasible to live on one income, but I’ll bet you can make some choices that allow you to live on less.

It may take some rethinking of how you do things and some sacrifices, but being able to live on less has allowed us to do some pretty awesome things, as you’ll see.

I just learned the term “Lifestyle Design” recently and I realized that it is the perfect way to describe how we’ve been able to live on one income. In basic terms, lifestyle design is making choices that design your life so that you can achieve your goals or live the way you want to live.

We wanted to make sure that we only needed one income to survive (becasue most of the time that’s all we had), and we’ve made choices over the years that made that possible.

People often use the term lifestyle design for people who want to live extremely frugally to retire early or people who decide to live off the grid. These lifestyles go against the normal way of doing things and require you to set your life up in a special way so that you can live how you want to live. I hope that make sense!

How We’ve Lived on One Income for 8 Years

If you’ve seen what our budget used to look like back when we lived on less than $1500 per month, you know that we had a tiny mortgage at our first house.

Yes, we live in a part of the US that has a low cost of living. Absolutely. But I will also tell you that we basically bought the least expensive house on the market in our town that was inhabitable. We easily could have spent double or more.

A mortgage is a long-term expense, and overspending means that you’re stuck with a high payment for decades. I was terrified of this, so we made sure to stay within a comfortable price range.

We moved to a bigger city when Austin finished school in 2016 (there were zero tech jobs in our tiny town).

Bigger city = More expensive city. Our income had increased, but so did the cost of the houses!

Again, we made a decision of how much we felt comfortable spending and stuck to that even though it severely limited location and home choices. It was a lot harder in a big city to find a neighborhood that was conveniently located, safe, and affordable for us. 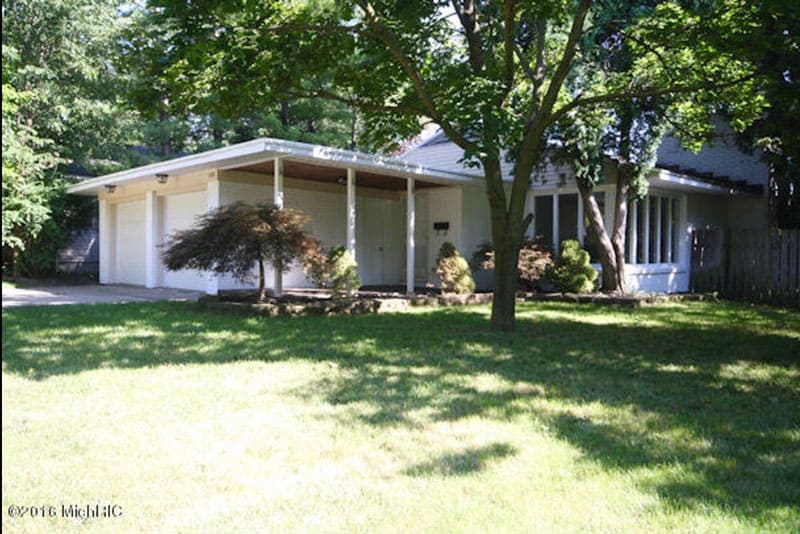 Choosing the location of our houses carefully has also played a big role in allowing us to live on one income. As I’ll explain more in a second, we’ve only ever had one car.

Our first house was in the middle of town and within walking distance to most of the jobs we ever had in that town. If we had bought a house out in the country, it would have made owning one car more complicated. Choices, right?

I loved that Austin and I always had the option to walk or bike to work. If Austin had the car, I could walk to shops or even to a doctor’s appointment if necessary.

While our current house’s location is not near as walkable as our old house, we made sure it was within 15 minutes of Austin’s work to make car sharing possible.

With jobs, we’ve always made sure that we could make a job work while only having one car.

Basically, this has just meant that we’ve made an effort to apply for jobs nearby. If Austin already needed a car for his current job, then I didn’t apply for jobs that would require me to have a car.

Back then, any jobs we had were not paying enough to warrant the cost of owning two cars. This was all while we lived in a very small town and walking or biking to most parts of town for work was doable (even though it sucked in the winter).

Notice I keep bring up the one car thing? It’s been a huge money saver! Not only do we only pay for insurance, gas, and repairs on one vehicle, we’ve also never had the up front cost of purchasing two vehicles.

This has certainly not always been convenient. That’s the point of this post though, really. We’ve made a choice to live off of one income, which has had huge benefits for us (getting to that part soon), so we’ve found ways to make things work. It’s a choice.

Right now, I work from home and Austin definitely needs a car to get to work. On days that I need the car, I have to drop him off at work and pick him up so that I can have the car for the day. Yeah, it’s annoying. I try to combine any appointments or errands that have to get done and only do this about once a week.

Choosing to buy a house within 15 minutes of his job helps make this possible. If he had an hour long commute, there’s no way I would drive him to work and go get him.

We live very frugally. In the early years of our marriage, there was no other choice! We lived off of less than $1500 per month (one income) and if I budgeted super carefully, we’d have $20 left at the end of then month to put into savings.

We’ve certainly been able to relax a lot since then, but we still have our frugal habits!

Austin packs lunches to bring to work most days. We only go out to eat once or twice a week. We DIY most of our house projects. I meal plan and shop at Aldi for groceries. We each get only $20 each for fun money/allowance each month. You can see what our current budget looks like here.

Once you’ve designed the big parts of your life: house, car, and job, it really comes down to living frugally with all of the little things.

Now the exciting stuff! While for most of our marriage we’ve only had one income (we’ve each taken turns bringing home the bacon because of the other person’s health problems or education), there have been periods of having two incomes.

Since we were so used to living frugally on one income, I tried to make sure we used the “extra” money for something good — something life changing for us, actually.

Right now, all of my income is going to paying off our debt! You can read all about the start of our debt free journey here and the latest progress report here.

We are racing to pay off our debt so that we can start working toward a dream that we had as newlyweds: to own a house on a lake by our 10 year anniversary (we just celebrated 8 years). Once the debt is payed off, we will begin saving big time to make this happen! 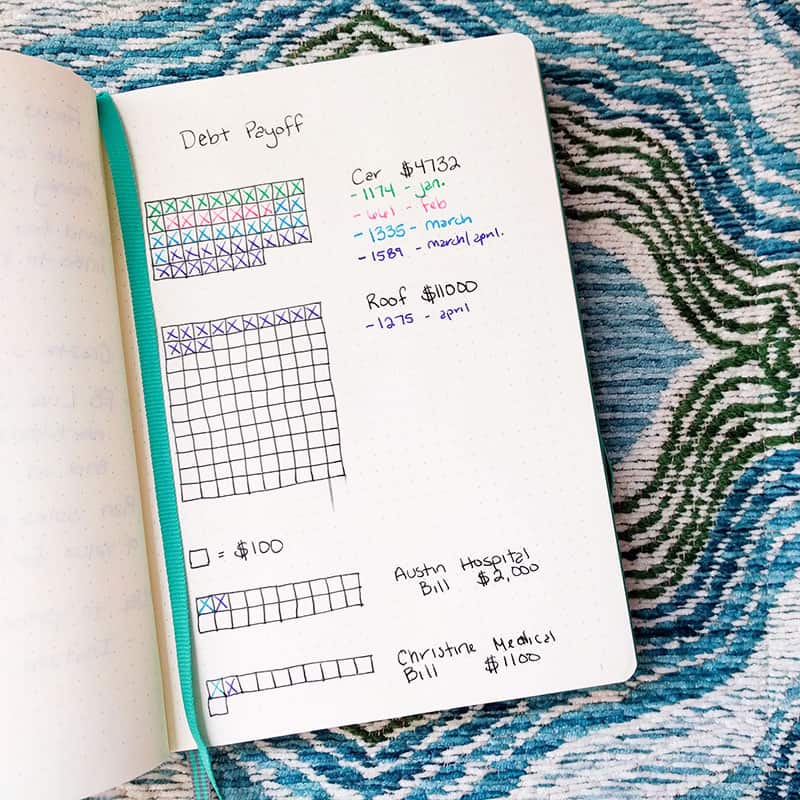 The previous time we had two full-time incomes was in 2015, I think. I had been working an office job and Austin got an great paying union job at a factory. The problem was, he hated it. The only good part was the pay!

We decided to use his income to save as much money as we could so that we could pay cash for him to finish college. We saved up thousands before he quit and went back to school full time.

This was one of the most life-changing choices we ever made. He loves what he does now which has had an incredibly positive impact on our family.

If we had started living large with both of those incomes, he would have continued to hate his job and never gained the knowledge and skills that led to his career. Life changing! Short term sacrifice has led to a brighter future for us!

(How cute is Austin’s college graduation cake? 😂 I thought the normal ones were boring, so I went the Toy Story cake!) 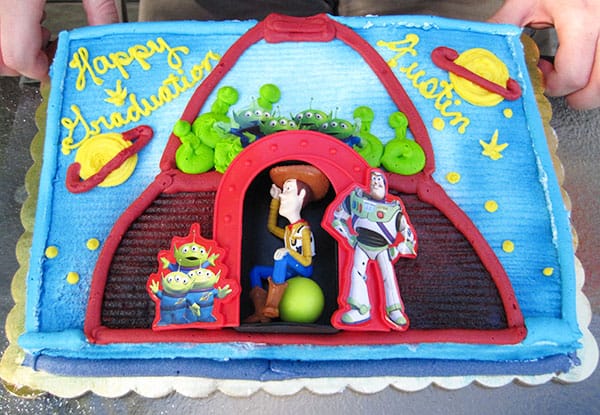 We’ve also used two incomes to create our emergency fund. Remember how I said I was thrilled if I could put away $20 per month? It was slow going to save up three-six months’ worth of expenses. I kept doing the best I could, but what really helped were the times we had more than one income.

That financial security we felt at having an emergency fund was well worth it!

By living off of one income for eight years, we’ve been able to accomplish some pretty amazing things, even with a small income. Paying off debt, paying for college for Austin, and saving an emergency fund have been some life changing accomplishments for us.

When there wasn’t any extra income to do big things with, we were still able to live comfortably because of the wise decisions we made about our jobs, housing, and other expenses.

Do you live on one income? I’d love to know what you think about this post in the comments! 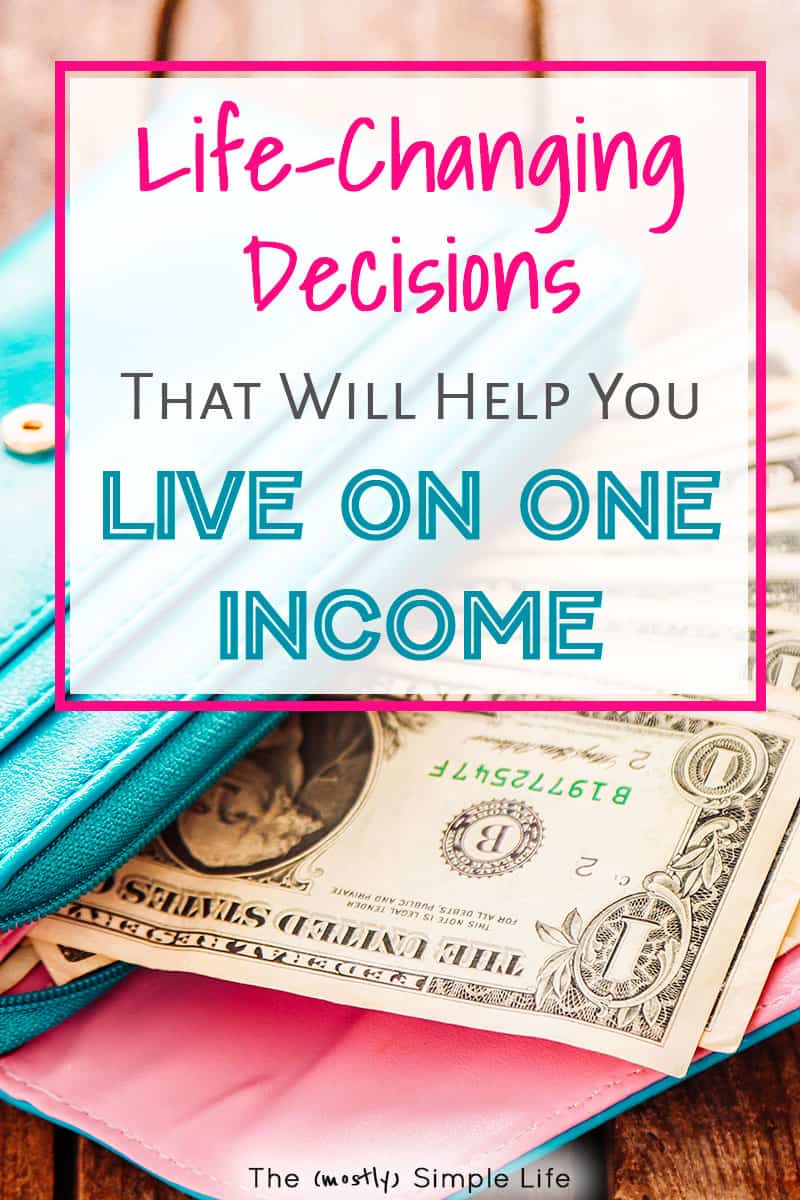 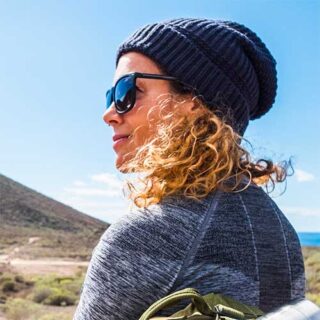