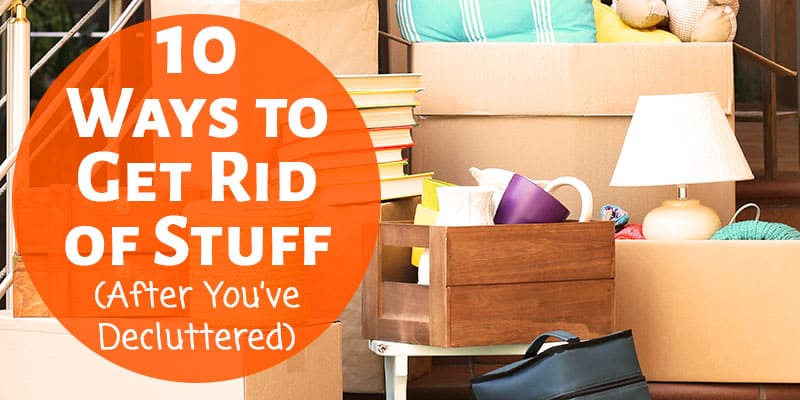 A big stumbling block to decluttering is actually getting the stuff out of your house!

How many times have you gone on a big decluttering spree, only to have the pile of unwanted stuff sit in a corner for months? It has certainly happened to me.

I’ve heard my mom talk about the frustration of not knowing what to do with everything once she has decided she doesn’t want it anymore. It can really turn into a big project after you’ve already done the big project of decluttering!

I wanted to go through the options of what to do with the items you’re ready to part with. Some of these take more work than others and some will make you money. The methods you chose really just depends on how much effort you want to put into it.

I’ll also explain my general system at the end.

10 Ways to Get Rid of Stuff Once You’ve Decluttered

You can sell things like books, CDs, DVDs, cell phones, video games/consoles, Lego toys and other tech. You just print off the free shipping label, send it in, and they will pay you for it the day after they receive it.

We used Decluttr recently to sell a video game console and were happy with the entire process, so we’ll be checking that site every time we have something to get rid of now.

You can also shop their website too if you’re looking to buy. It’ll be my first stop when we need to replace our cell phones.

On Amazon, you have two options for getting rid of stuff to make some money: trading in or selling.

You can also become a seller on Amazon. This has the potential to earn you more money, but is a bit more complicated. We’ve done this for a lot of textbooks because the trade-in value was much less than what you could sell them for.

If you want to sell on Amazon, I recommend you do a little research and sell everything through FBA, which means “fulfilled by Amazon”. Basically, you send all of your items in to Amazon, and then when they sell Amazon handles shipping the items to the customer.

A lot of people make a full-time income from home by doing Amazon FBA! If you’re interested in how this works, The Selling Family has an entire site devoted to teaching people how to make money selling on Amazon as well as courses available.

Most cities have local area selling groups (or “online garage sale” groups) on Facebook that you can join to sell things. It’s very similar to using Craigslist and I like it better.

Each group might have different rules, but you basically just post a photo of what you’re selling along with a brief description and price. If someone wants it they will let you know in the comments. Then, you can arrange to to meet them.

When we lived out in the country, this was amazing because the closest Craigslist city was 45 minutes away but we had a local selling group that was much more convenient. We also got better prices for the items we were selling (people didn’t talk us down) and it felt safer because you could see the Facebook profile of the person you were going to meet.

It does still take some effort, so I generally don’t bother with selling something unless it’s worth at least $20, but I know a lot of people make a good amount of money from selling lots of little things.

Of course, Craigslist is another selling option. It works similarly to selling on Facebook. I’m sure it depends on your area as to which method is more successful for you.

If you have nice home pieces or name brand clothing, you might look into consigning them to see if you can make some money. Most stores have guidelines for what you can bring in and what condition it needs to be in.

This won’t earn you money immediately, as you have to wait for the items to sell before you get paid, but is a fairly easy way to get some things off your hands.

Just look up consignment stores in your area and ask about their policies.

A garage sale might be the way to go if you have a whole lot to get rid of and live in an area where there is a enough traffic for a sale.

This is honestly one of my least favorite options just because it’s time consuming and a lot of work to get everything set up and priced.

You also will likely be keeping a lot of things in your house while you pile up enough stuff to have a garage sale. I’m never thrilled with this idea because I like to get things out of the house ASAP. However, I know a lot of people have very successful sales and actually enjoy the process!

7. Give to Friends & Family

Alright, we’re through with the money-making options.

A great way to get rid of stuff is to tell family or friends that you don’t want it and see if they do! We do this all the time. I always have a crate in our office of things we don’t need anymore and every time my in-laws come over they end up looking through the crate to see if they want anything. It’s perfect for us because it takes almost no effort and we’re glad to give them anything they could use.

If you’re going to do this, I recommend telling people that you’ve got stuff that needs to go and if they’re interested they need to come take a look before a certain date. Otherwise, you could be hanging on to everything for far too long waiting for someone to come look at it. 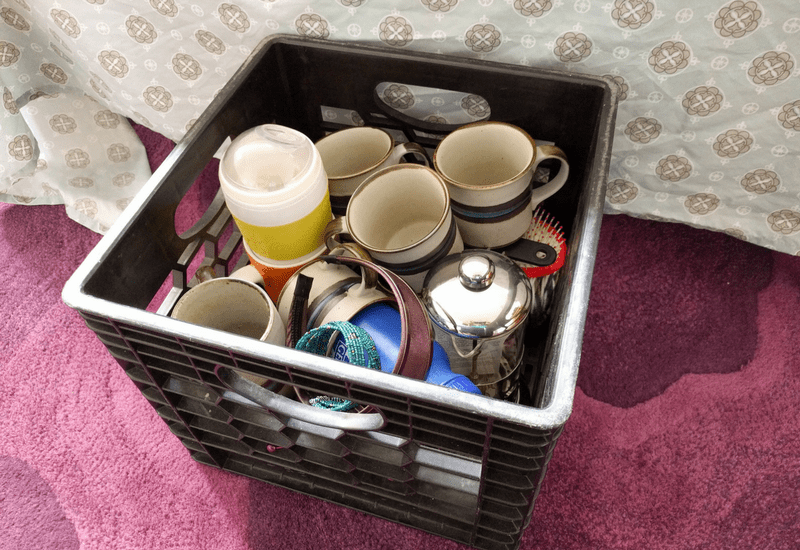 I’ve seen people try to put prices on these items, though I haven’t tried it myself. We always put a sign that says “free” on whatever we put out. It’s a fabulous way to get rid of items that are worthless to you but might be worth something to someone else.

There are so many places to donate to. If you have furniture or a huge amount of items, there are even some non-profits that will send a truck to come pick things up which can be helpful. 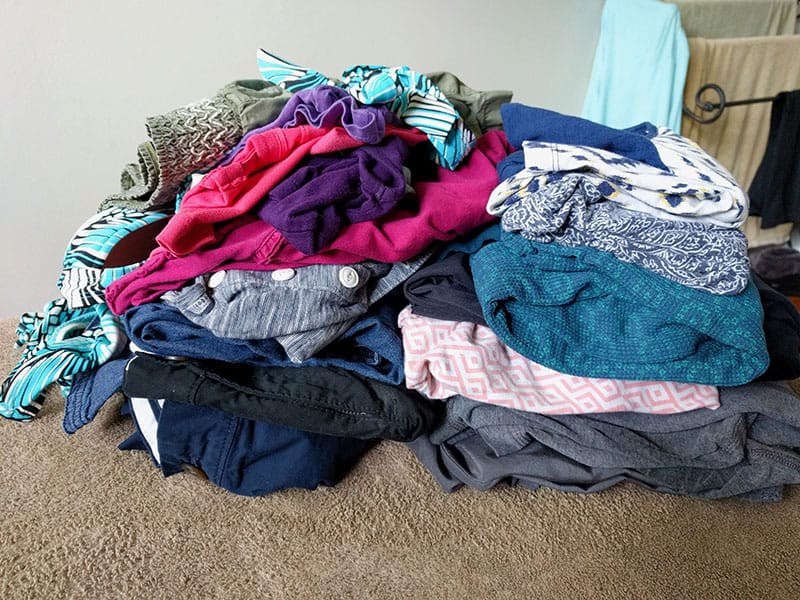 I suppose the last option would be the trash, but I first have to mention recycling! We’ve been making effort to have less actual trash. So much can be recycled, so don’t forget to think about this before you chuck something in the trash.

BONUS OPTION! I just realized that I forgot to mention local online auctions! These are an awesome way to get rid of things if you’re not too picky about how much money you get. For the online auctions we’ve used, you drop your stuff off at the auction and fill out a short description of what you’re selling. Your stuff gets listed online where people can bid on it. The auctions around here last for a week and then there’s a waiting period before you can pick up your check. It’s a very low-fuss way to make some money on stuff. This is good for furniture, tools, and other home items. The auctions we’ve used don’t take clothing.

We’ve used all of these methods at different times and definitely have our favorites.

Here’s the basic system I currently use:

I hope this list of ways to get rid of stuff helps you think through the best ways for you to get rid the items you’ve decluttered!

How to Find Time to Declutter

How to Stop Clutter Before It Starts

Decluttering: How to Get Your Spouse On Board

Creating a Year Round Decluttering Routine

⇒ How have you gotten rid of stuff in the past? How have you been most successful in making money off of decluttered items?

Wonderful! Now just check your email to get started with the challenge! 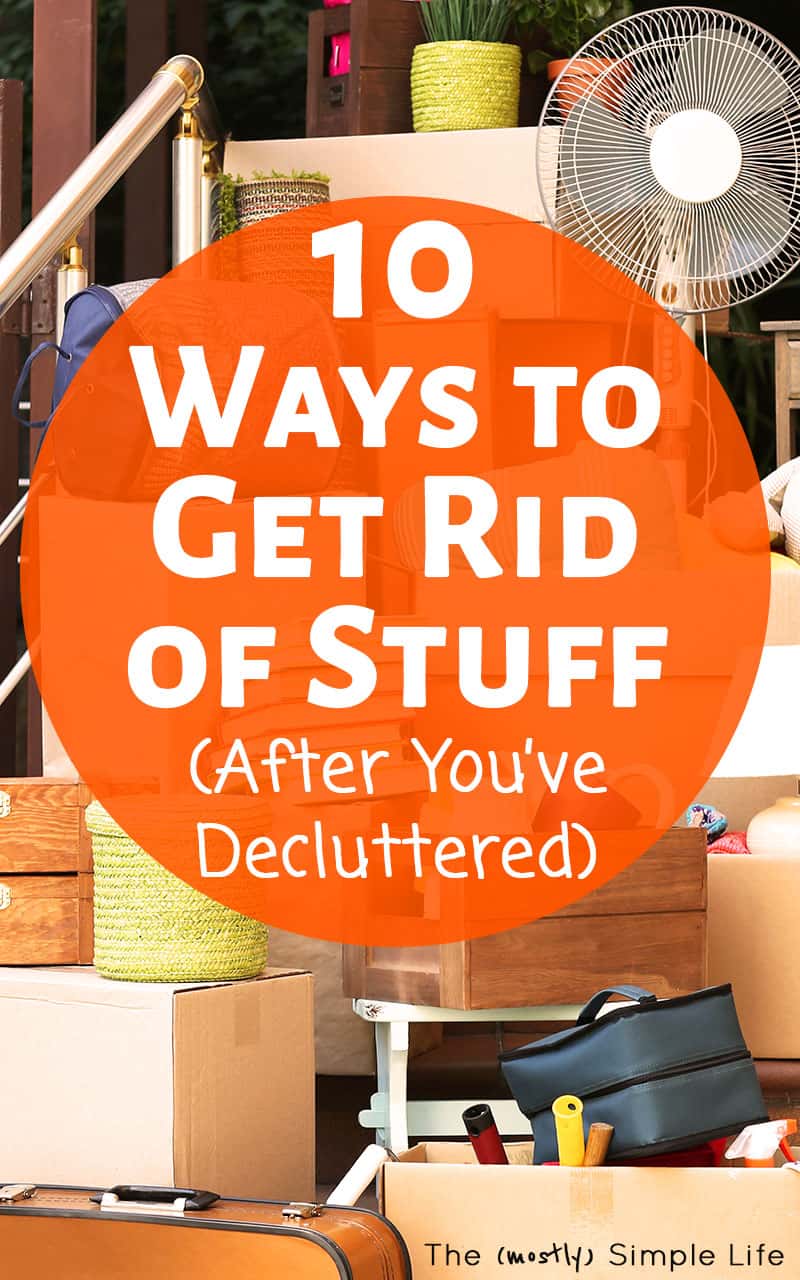 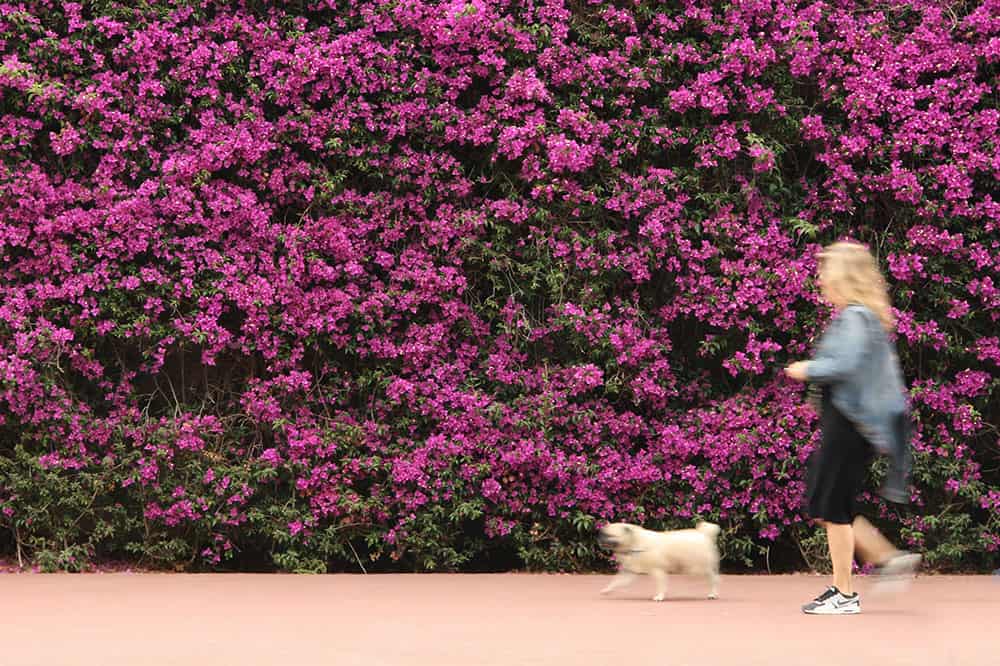