I still remember my early days of fitness. Everything was new and exciting, and I daydreamed about everything I could do and how it would impact my life.

At the same time, everything was also frustrating, confusing, and a tad overwhelming. The activities felt awkward and foreign, and I had trouble establishing a solid routine.

Of course, each new journey presents its unique challenges. But, with the right tactics, we can make the process a bit easier and boost our odds of success. To that end, I’ve outlined four fantastic tactics you should use to build better and healthier fitness habits to elevate your health and happiness.

1. Start In A Small Way for Early Wins

You’re motivated and eager to establish healthy fitness habits. The biggest mistake you could make at this stage is to go all-in and reform too much at once. We are creatures of habit, and we don’t fare well when we change too much.

Sure, you might be able to stick with a demanding fitness program or restrictive diet for a while. But once the initial motivation fades, you start feeling overwhelmed. At that point, it’s only a matter of time before you give up.

Instead, it’s best to start making small changes. For example, make it a point to exercise for ten minutes, not an hour. Focus on having one healthy meal each day instead of following a restrictive diet.

2. Focus on Consistency, Not Perfection

Making small changes is beneficial because it allows you to focus on the fundamental factor that makes or breaks your long-term success: consistency.

In truth, being consistent with the process is a lot more important than everything else. Even if you’re not doing things in the most optimal ways, being consistent allows you to make steady progress, refine your process, and improve tremendously in the long run.

So, instead of looking for the perfect diet or training plan, make it a point to be consistent with positive habits:

As you work consistently, even small efforts will lead to growth and progress. For example, if you make it a point to jog for ten minutes every morning, you will gradually notice your endurance improving. Measure your progress so that you can see how you are improving. You will be able to cover greater distances in the same time. At some point, you will also see that running for ten minutes isn’t nearly as challenging as it once was.

This is fantastic because it creates a positive feedback loop. Your efforts get rewarded, and you feel motivated to keep going. You put more effort into it, and you see more significant improvements.

Even if it doesn’t seem like much on a day-to-day or week-to-week basis, progress adds up. For example, if you add 20 yards to your total distance every week, that would compound to over half a mile in a year.

4. Write down a plan to answer 4 key questions: “What, how long, where, when“

Studies show that having a concrete plan significantly increases your chances of following through with it & staying consistent:

In another study from 1999 (1), researchers split participants into two camps. One group was told to take a daily vitamin C whenever they wanted, and the other group had to specify when and where they would take it. Researchers found that the subjects with a concrete plan were much more likely to stay consistent with their intake.

These studies and others suggest something vital for human behavior:

To make ourselves more likely to follow through with things, we need to set concrete plans of action. Specifically, it appears that we should get clear on the location, modality, and duration (what, how long, where, when).  In the context of exercise, this could be something like:

Do a circuit routine (what) for twenty minutes (how long) in the living room (where) at 6 PM (when). 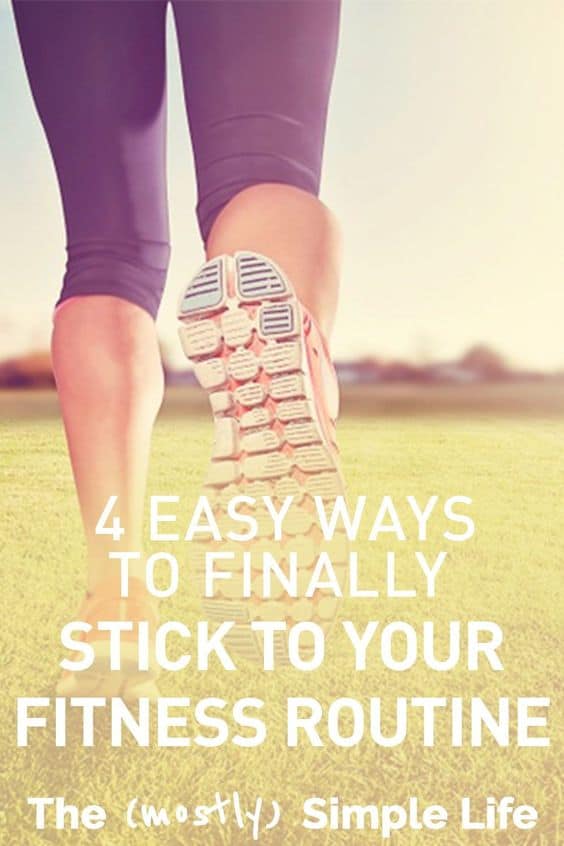